We flew to Cairns, Australia via United Airlines. We bought our tickets from 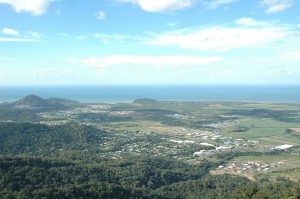 Priceline.com. It took a total of 31 hrs. to arrive into Cairns.  Because one of their planes was delayed and we missed our connecting flight, otherwise we would have been there 4 hrs. earlier.  Between all 6 airlines going there and back we didn’t have to sit by one person because we would look online to see what seats are empty and move ours.  The 14 hour flight to Sydney from San Francisco Leo and I each had 3 seats to ourselves and was able to lie down and sleep.

We lost a day when we arrived because of the time difference.  Cairns (pronounced cans) don’t have many swimmable beaches because there are crocodiles and box jellyfish on the shores and it was really swampy.  The box jelly fish are tiny and stay in shallow water, but they are deadly, they don’t go out to the Great Barrier Reef.

We stayed at the Holiday Inn and our room faced the harbor and the ocean.  The view was beautiful. The hotel had a good location right next to the boardwalk.  It was a little run down. There were a ton of birds everywhere and in the morning they would wake us up. Cairns is a smaller town, not like Sydney.

We went just went shopping.  We ate ice-cream on the boardwalk.  I saw a little monkey in the tree and Leo threw up some ice-cream cone to it and it would make a noise.  It was getting dark and all of a sudden a huge bat, about 5 ft. long flew out of the tree and circled above our heads, it wasn’t a monkey at all.  It scared us and was really funny.

The next day we rode a train to Kuranda Village on top of the Rainforest, and we shopped on top and went to the Rainforest Station.  We got to hold a Koala and an Alligator, pet a kangaroo and Wallabies.  The locals never say Koala Bear, just Koala. We went on a duck army boat tour around the rainforest and saw a presentation on how to survive in the rainforest, very interesting.  We also learned how to throw a boomerang and then we rode the sky rail down which had amazing views and we sat in a cart all by ourselves.

Scuba Diving: The Great Barrier Reef is a 1 1/2 out on boat and that is where we dived.  We stayed on a live aboard boat for 1 night two days and did 7 dives.  The coral is amazing.  We saw 3 long skinny reef sharks and huge giant clams as big as me that would clam up if you got too close, on our first dive. We saw Wally the Wassie Fish, he is a fish that follows all the dive boats around and who is bigger than me.  He likes to be pet; he acts more like a dog then a fish.  Then at night the boat shined their lights on the water and they were feeding bread to the fish wish attracted gray sharks (the fatter bigger, sharks that feed at night).  There were about 12 while we were getting ready to go out diving again.  The dive masters said to just be careful not to land on the sharks when you jump in and then hurry and descend to the bottom, don’t stay on top where they are feeding.  The first guy jumped in and scared the sharks a while for a little while, then we jumped in and followed.  We saw their green eyes glow in the dark and it was a little creepy.  We took flashlights and saw the bubble that parrot fish sleep in at night.  It was amazing!

The next morning we were woken up at 5:50 am for our sunrise dive.  We were really tired and I didn’t want to get up let alone get in a damp wet-suite and jump in the cold water before the sun was up again.  But, I did and it was our favorite dive that we had ever been on.  Everything was active.  The nocturnal fish were just settling down and the regular fish were waking up to feed.  We saw the parrot bubbles again that had been popped since they had woken up.  We saw a turtle that just woke up and was going up for air; we saw infant fish of all kinds in one group eating.  We saw long white worms, more clams, beautiful colors of coral, and large fish as big as me.  We ran into a group of giant Hump parrot fish, they aren’t as colorful as the regular parrot fish, but they were huge.  I was mad at myself for not petting Wally the Wassie earlier, and so I wanted to pet one a parrot fish.  They were all sleep in a school over a big coral foundation.  I swam up slowly with my hand out.  One fish opened its eyes and looked at me and I just went slowly.  I could see its teeth and I reached out and pet its side.  Then they swam away slowly to another spot close by.  I was so excited and couldn’t believe it let me pet it.  A jelly fish stung me when I was at the top swimming to the boat, I didn’t see it because my head was above water, but I screamed.  It felt like someone whipped me.  The next day there were blisters and then it started bleeding.  It stung me through the wetsuit and it covers at least 6 inches long and a couple inches wide in dots everywhere. It wasn’t quite as clear as the Caribbean water but much better sea life. We didn’t see one eel, lobster or barracuda like we normally do.  It was just really different. The diving was our favorite part.

Check the Scuba Spots link to see a picture of the giant clam.  The Great Barrier Reef is one of the best spots in the world to scuba dive as well as snorkel.