What Are Exchange Rates?

Exchange Rates (or foreign exchange rates) between two currencies is the rate at which one currency will be exchanged for another. It is also regarded as the value of one country’s currency in terms of another currency.

How Do Exchange Rates Fluctuate? 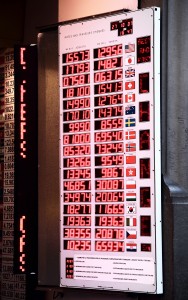 Floating exchange rates are determined in the foreign exchange market by supply and demand.  Currencies trade 24 hours a day (except the market closes for a while on the weekends), this means that currencies can fluctuate often. Valuations are determined by the currency flowing in and out of a country and interest rates.  If there is a high demand, its value will usually increase.  Demand for a currency is created by tourism, international trade, speculation, risk factors, mergers and acquisitions and other economic factors.

A pegged exchange rate or fixed system is when a country’s currency doesn’t fluctuate day to day.  They often peg their currency to another currency which is usually the US dollar. Their government has to work at keeping their rate stable.  They have to hold large reserves of foreign currency to mitigate the supply and demand.  Developing countries may use this system to prevent high inflation. Fixed systems can lead to black market exchangers who go against their government and trade on the side according to the market’s supply and demand.  If the government doesn’t take care of the pegged rate, they may end up with a worthless currency.

The buying rate is the rate at which money dealers will buy foreign currency from you (the currency you came with), and the selling rate is the rate at which they will sell the currency to you (they sell a currency that is foreign to them back to you, aka your local currency). The quoted rates will have an allowance for a dealer’s margin (or profit) in trading.  In other words instead of quoting the real exchange rate, the dealer will charge you for his fee by quoting you in a way that is less favorable to you.  If the dealer is quoting you with the real exchange rate, then he may add on a flat fee or a % for his commission.  Sometimes they do this without telling you, so always ask what their fees or commission is before the exchange.

Different rates may be quoted for exchanging cash, using a traveler’s cheques for the exchange, or exchanging via debit/credit cards.  They will usually charge you a higher fee for the traveler’s cheques because it takes more time, however some prefer it over cash since cash is easier to forge.  Sometimes a credit card transaction may cost you extra because they may be charged by the credit card company.   Instead of charging your credit card at an exchange rate, get cash out with the ATM and avoid the middle man.

Thanks for visiting What are Exchange Rates

How to Exchange Currency

Where to Exchange Currency